156 Years Ago: Children and Teens Remember the Gettysburg Address 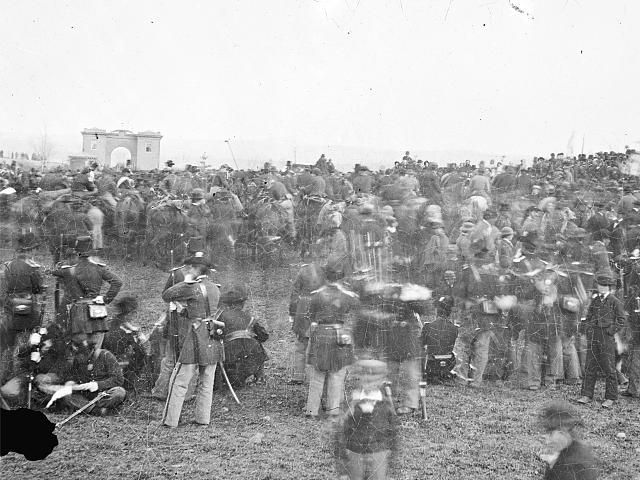 156 years ago today, thousands of Adams County residents witnessed one of the most famous speeches in American history: Lincoln's Gettysburg Address. Some of the most perceptive and impressionable listeners were children and teens. Here is some of what they remembered about that day:

“When Lincoln had finished his address and taken his seat, the people stood as if dumbfounded, not by what had been said, as by its briefness.  As I remember, it was the general topic of conversation for a long time. Little did they realize that it would go down in history as one of the greatest addresses ever delivered by man and is now one of the classics of the age.” - Hugh M. Ziegler, age 10

“I remember vividly of a man who lifted me up to see Lincoln. This was opposite the Court House. The street was crowded with people leaving only enough room for him to pass on his horse. He would turn from side to side looking at the people on either side when he passed with a solemn face. He looked rather odd on such a small horse.” -Annie Skelly, age 7

“When Lincoln dedicated the Soldiers Cemetery, Aunt Sarah and I were there with some neighbors. I thought Edward Everett’s speech would never end—I wondered how President Lincoln could sit on that low, armless rocker, really made for small people, a chair intended for seamstresses, or for nursing mothers. I could not believe it—and, after his address, I noticed the three-quarter horse he had to ride, I thought that was worse—to have a President ride with his feet so close to the ground. When he spoke, I knew he was very sorry about the war and very proud of our country and his soldiers. His eyes shone as he spoke—I knew he was a kind person, and I suppose he did not want the war anymore than we did.” -Sarah Jane Hoffman, age 6

“I was surprised and I might say awed by his great height, his black hair and beard, his dark complexion, his head covered with a tall silk hat.  I thought he was the tallest man I had ever seen.” -William C. Storrick, age 7

“I was too young to judge the character of his speech . . . but what impressed me most was its delivery.  The words seemed to come from the soul of the man, from a heart torn by anguish.” -Daniel A. Skelly, age 18

“My eagerness to see and hear the President-whom I regarded as much above all other men...centered all my attention on Mr. Lincoln and no word or movement of his escaped my attention, I had heard that Mr. Lincoln was the homeliest man in the country, but when my eyes beheld that sad but kindly countenance, those strong rugged features seemed handsome to me. He looked sadly over the cemetery and after a pause began his famous speech . . . in a sad voice, entirely devoid of the oratorical zeal and fire which had characterized Mr. Everett’s address.” -William H. Tipton, age 13

“The deep feeling of the speaker, combined with masterful self-control and firmly set purpose, made a profound impression.” -Henry Eyster Jacobs, age 19

“It was the face I saw—sad—deep lined—earnestly thoughtful.  That thoughtful look back of the eyes. It was the spirit of the man I seemed to see.”  -Gates Fahnestock, age 10

“The chief impression made on me as a child . . . was of the inexpressible sadness of his face.” -Liberty Hollinger, age 17

If you enjoyed this article, consider adding your name to our email list to receive updates about our programs, events, and special opportunities.