The Beginning of the Road System in Adams County 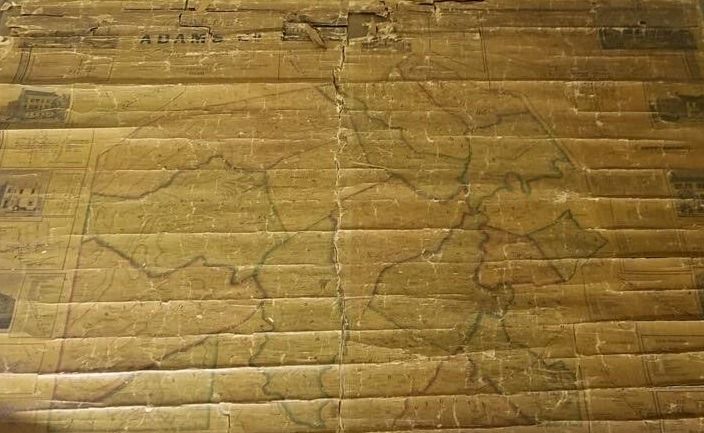 Check a road map of Adams County right now.  The roads around Gettysburg seem to connect the town to everywhere: there are direct routes south to Washington D.C. and Baltimore, east to Hanover and Lancaster, North to Harrisburg, and west to Chambersburg. Gettysburg has always had a large volume of traffic that is disproportionate to its population.  This is surely the result of its location as a crossroads for the county.

The beginning of the Adams County road system in the 1740s predates the founding of Gettysburg.  The rapid growth of population in Adams County made the narrow Indian paths used in the early 1700s inadequate for travel and trade.  More passable roads were needed to provide access “to mill, market, and meeting.” To open a road, the residents needed to draft a petition to the county government to open the process of building and ratifying the road. In 1742, two petitions were filed by the citizens of Marsh Creek Settlement—the earliest settlement in the region which was established by the Scots-Irish settlers around 1729—to build a road from the settlement (Gettysburg) east to the towns of York and Lancaster. After their petition was approved, the County’s court would appoint six viewers to view, or lay out, the road.  In this case, the appointed viewers included Hance Hamilton Jr., who was later the first sheriff of newly established York County (1749), and son of Hance Hamilton Sr. who helped found the Marsh Creek Settlement.  However, not everyone was in favor of road construction. In the times without roads, there were men who led pack-horses “trains” through the rough forests and over unbridged streams.  Their caravans provided freight services. These “freighters” violently opposed to the construction of roads, which would destroy their business.

Before 1749, neither Adams or York County existed but were part of Lancaster County.  In 1739 and 1740, roads were built from Lancaster to the present site of Columbia and Harrisburg, and the Columbia road was extended across the Susquehanna River through York, Hanover, and Littlestown to the provincial line, becoming known as the Monocacy Road and the first road across the present-day boundary of Adams County.  Marylanders customarily referred to it as “The Great Wagon Road to Lancaster.” And the road from Hanover to Baltimore, which was the most important commercial zone in the region at the time, was constructed as early as 1736. Thus, a road to York through New Oxford connected Gettysburg to the existing road system for the first time.

The Black’s Gap road was built in 1747.  It followed the present path of U.S. 30 from York through Abbottstown and New Oxford, and bore northwest from there through Hunterstown and Mummasburg to Hilltown.  It crossed the mountain at Black’s Gap (known in 1747 as the Chambersburg Gap, and today as the Cashtown Gap) into the Cumberland Valley. The road became a part of the historic Pittsburg-Philadelphia Wagon Road. Russell’s Tavern sat on the Black’s Gap Road.  In 1794, when George Washington was returning from his military action against the Whiskey Rebels from Bedford, he is reported to have lodged the night of October 23rd at Russell’s Tavern.  Russell’s Tavern still stands at a couple miles north of Gettysburg.  In 1748, the road from Gettysburg to the southwest through Fairfield and Fountaindale was built which crossed the mountain at Nicholson’s Gap to Hagerstown.  Today this includes U.S. 116 and U.S. 16.

The 1740s saw the initial efforts at road construction in Adams County.   Road construction was a pre-condition for the county’s expansion.   Roads were essential to every aspects of life for the settlers.  These earliest roads provided the framework of the modern road system of Adams County.  Since the 18th century the county roads have served the local population and every traveler who visits Adams County.