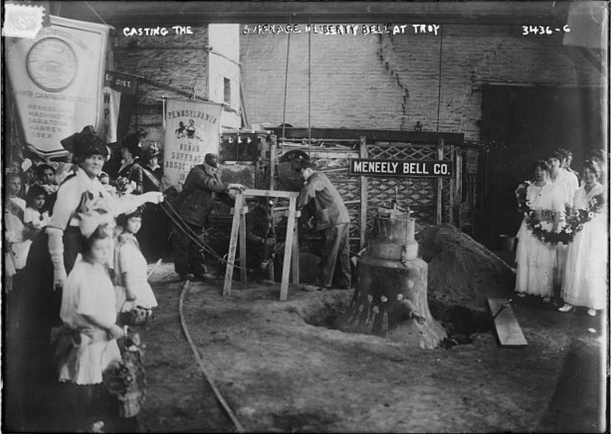 “Father, brother, husband, son, vote for Amendment One.”  This call was extended to all male voters in Pennsylvania in 1915.  An amendment, Number One, was on the November ballot to give the women of Pennsylvania the right to vote in state elections.  If passed, Pennsylvania would join that special group of eighteen suffrage states that already allowed women to vote in state elections.  To be successful, a majority of voters in the state had to vote “yes” for the initiative, but in 1915 all voters were men.   The women in all the Pennsylvania suffrage organizations needed something to catch the attention of male voters who then might then be convinced of the fairness of woman suffrage.  In Pennsylvania, it was suggested that a replica of the Liberty Bell be sent on a tour of the state to act as the “lure”.   Katherine Wentworth Rauschenberger, a leader in the Women Suffrage Party of Chester County, loved the idea.  She was a woman of means.  She decided to order and pay for the replica.

The new bell was cast in Troy, New York at the Meneely Bell Foundry.   Like the original Liberty Bell it weighed 2000 pounds.  There were a few differences between the original bell and its replica.  The phrase “Establish Justice” was added to the replica, the famous crack was not included, and the decision was made to chain the clapper so that the bell could not ring.  The silenced bell symbolized the women who did not have the vote.

Mrs. Rauschenberger in association with the Pennsylvania Women’s Suffrage Association sent the now christened “Freedom Bell” on a tour of all sixty-seven counties in the state.  It followed a zig-zag route to make sure that every Pennsylvanian had an opportunity to see the bell and hear the suffrage message.  Mounted on a specially designed flat-bed truck, the bell and its escorts left Philadelphia in June and travelled the state for four months covering about 5000 miles.  The organizers counted on local suffrage organizations to drum up interest and find places where the bell could be brought and rallies held.

On September 23 the Gettysburg Times and the Star and Sentinel published detailed articles about the bell.  The Adams County News followed on September 25th.   On October 2, 1915, the Gettysburg’s newspapers, the Times and the Compiler ran front page stories on the bell alerting readers to the schedule of speeches, and places where the bell could be viewed.  The bell was expected to arrive in Fountain Dale, on the morning of October 5th, move onto Fairfield, Gettysburg, Littlestown, McSherrystown, New Oxford and Abbottstown.  Depending on the program, the bell would stay anywhere from fifteen minutes to two hours.  After a visit of approximately one and one-half days in Adams County the bell would move on to York County, Lancaster County and then back to Philadelphia.  In the end, bad weather made the stay in Adams County challenging.

It began to rain the evening of October 4th and continued to rain through the morning of October 5th.  The roads, which had been made muddy and rough by the rain, slowed the truck and its attendant vehicles.  The stop at Fountain Dale was short and, for those with the bell, disappointing.  There were few voters to talk to.  In Fairfield, however, the bell was greeted by an enthusiastic crowd of men, women, and children.  Rev. William K. Fleck introduced the speakers for a thirty-minute program.  The original plan called for a delegation of several vehicles from Gettysburg to meet the bell convoy in Fairfield and accompany it during the rest of its visit to the county.  Because of the weather and road conditions, only one car came to escort the bell to Gettysburg.

When Gettysburg attorney, John D. Keith, arrived in Gettysburg’s Square with the bell and its escorts, they were met by a crowd of approximately 350 men and women, and a “crowd” of Gettysburg College students.  The Court House bell pealed its welcome.   The bell was parked on the northeast quadrant of the square in front of Weaver’s Department Store and two speakers appealed to the men of Gettysburg to support the state suffrage amendment.

Both speakers, Mrs. Myron T. Vorce from Ohio and Miss Mary Bakewell from Pittsburgh, used the imagery of the Battlefield to support their view that a complete democracy demanded the participation of women in the voting process.  The October 9th issue of the Compiler quoted Mrs. Vorce:  “I stand here in the name of American womanhood asking not that you men shed your blood for us to make good the principle which was established on this battlefield, but that you use that symbol of freedom, your vote, to confer equality on us.  To the right and left of us and all about these fields are monuments to those who died to free an enslaved race.  We women are asking to-day that you would put us on a political basis with the men then freed.  We want you to make Lincoln’s words a living truth.  We are people, one-half of the people and until you co-franchise us this will be a government of the people, for the people, BY THE MEN .  .  . We simply want our share in the government under which we live.  She quoted Abraham Lincoln about the derivation of authority in government: that “all just powers of government derive their powers . . . from the consent of the governed.”

The second speaker, Miss Bakewell, had been in Gettysburg the year before, and spoke at the Court House on the issue of woman suffrage.  Again in the words of the Compiler “she won our people with her brilliant address.”  Miss Bakewell, went beyond Civil War imagery when she pointed out that government needed women.  Who better than woman could be sure that women working in the factories and other businesses, had the necessary workplace protection.  She pointed out that women were most knowledgeable about American families and how to protect the safety of our homes, our food sources and our water.  In the end she said, “If you don’t grant us the vote next November, we will be back at you again next year just as hard as we are today.”

It was a quick visit in Gettysburg.  It was expected that the party would stay for lunch, but the delays caused by the weather and the demands of the tour required that the party move on to its next stop in Littlestown.  After leaving Adams County it then moved on to York and Lancaster Counties on its way back to Philadelphia.

Despite their tireless efforts and careful planning, the bell campaign did not help women in Pennsylvania secure the right to vote in state elections in 1915.  Here in Adams County the resolution for the amendment lost 941 to 2,361.

When the Nineteenth Amendment was finally passed in 1920, the bell was part of the Philadelphia celebration.  Its silenced clapper was released and the bell was rung 48 times.

Since Mrs. Rauschenberger owned the Bell she kept it at her home after 1920, loaning it out occasionally to events she considered worthy.  She always hoped her Bell would stand next to the Liberty Bell in Independence Hall.   She felt the Freedom Bell completed the job of the Liberty Bell, but the U.S. government did not want it.  She deeded the Bell to the Washington Memorial Chapel in Valley Forge.  When she died in 1943 the bell was sent there.  It spent the next 50 years in a chicken wire cage.  In 1992 the rector, Rev. Richard Lyon Stinson decided the Bell deserved better treatment and with the League of Women Voters and the DAR raised money for its current home in the Chapel Carillon.  Today you can visit the Carillon and see this unique piece of women’s history in which every county our state can claim a connection—Adams County included.