Civilians of the Battle of Gettysburg 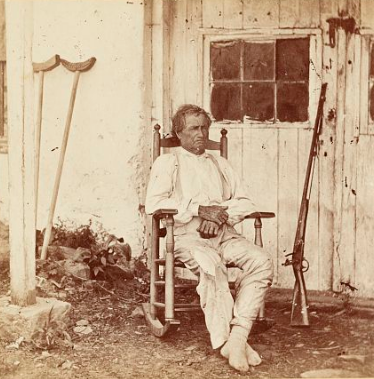 When thinking of the Battle of Gettysburg, one usually thinks of the leadership of the generals, or the bravery of the men under their orders. Our attention is on the fighting. One crucial group of individuals who were present in the town are often left out of the story--the residents of Gettysburg.  The townspeople were heavily involved in the battle and took on unexpected roles both during and after the battle.

Gettysburg's civilian "hero" was John Burns.  Burns became a national celebrity because of his deeds on the first day of fighting--July 1st.  Burns, a veteran of the War of 1812, was seen by neighbors watching the fighting on Seminary Ridge during the early morning with his old flint lock musket in his hand. He went home, and returned to Seminary Ridge with a rifled musket.  How he obtained the musket is the subject of numerous contradictory stories.  With his new rifle, Burns went to the McPherson farm and asked to join the 150th Pennsylvania volunteers.  His offer of help was turned down.  He was sent to the 7th Wisconsin, assigned to the nearby Herbst wood lot, who allowed him to stay with them.  As fighting later surged around them, Burns was wounded multiple times.  Eventually a shot to his ankle brought him down.  As Union forces retreated that afternoon, Burns threw away his rifle and emptied his pockets of ammo, burying the bullets beneath him.  When he was discovered lying on the ground by Confederate soldiers he claimed to have been caught up in the unexpected fighting.  He was eventually treated by Confederate surgeons and returned to his home on Chambersburg Street in town. In the reporting after the battle John Burns was called a "hero", although he may have coined the term himself.  Abraham Lincoln asked to meet him on November 19, 1863 after the dedication of the National Cemetery.  He was honored in a poem by Bret Harte, and depicted in a painting by Xanthus Smith.  Below is stereograph of Burns recovering at his home.

The most important help the civilians provided, both during and after the battle, was nursing care. The women of Gettysburg tended the sick and wounded from both armies.  One unlikely nurse was Elizabeth Salome Myers, a school teacher.  Forty years after the battle she wrote, How a Gettysburg Schoolteacher Spent Her Vacation in 1863.  In it she recounts she "never could bear the sight of blood" when she was asked to nurse wounded men. She explained that Dr. James Fulton, surgeon of the 143rd Pennsylvania Volunteers, called for girls to help at St. Francis Catholic Church and the United Presbyterian Church on High Street. The first man she tried to help at St. Francis said that there was nothing she could do to help him because he was going to die.  In shock, she ran from the church, but quickly recovered and returned to the man, Sergeant Alexander Stewart of the 149th Pennsylvania Volunteers.  He asked her to read the 14th chapter of John to him.  This was the same passage his family read together before he and his brother left home to fight. Although her experiences were often traumatic, Miss Myers was thankful to have been able to soothe the dying, brave men. "Sallie" Myers nursed the wounded through the summer in her family's home and in the General Hospital east of Gettysburg.  Like many of the civilian accounts, her diaries can be found at the Adams County Historical Society.

Many Gettysburg civilians had remarkable experiences both during and after the battle.  Robert McClean, a student at Pennsylvania (now Gettysburg) College, was in Dr. Michael Jacobs class on the morning of July 1st.  Robert headed towards the Seminary after Dr. Jacobs realized he could not hold the students' attention because of the rifle and canon fire, and dismissed the class.  A canon fired in Robert's direction, shot over his head a few minutes after he arrived on the Ridge.  He admitted that the experience “increased his interest in a copy of the New Testament". In town, Sophia Culp Epley saw rebels trying to take her cow, and yelled at them because she needed the cow's milk to feed her children.  They left empty-handed.  Many civilians were forced to leave their houses because they were being used by marksmen.  John Rupp's home at the south end of Baltimore Street was broken into by both armies and was being used by both Union and Confederate marksmen without their knowing the other men were there.  John hid in the basement. Catherine Garlach shamed a Confederate marksman out of her home accusing him of drawing fire endangering innocent civilians. Jennie Wade became famous after her death on July 3.  She was the only Gettysburg civilian killed during the battle while baking bread at the home of her sister on Baltimore Street.

Every soldier had a story about the battle, and so did every resident of Gettysburg.  Acts of bravery and sacrifice happened on the battlefield and behind the lines.  These stories must not be forgotten.  The story of the battle is incomplete without all of them.