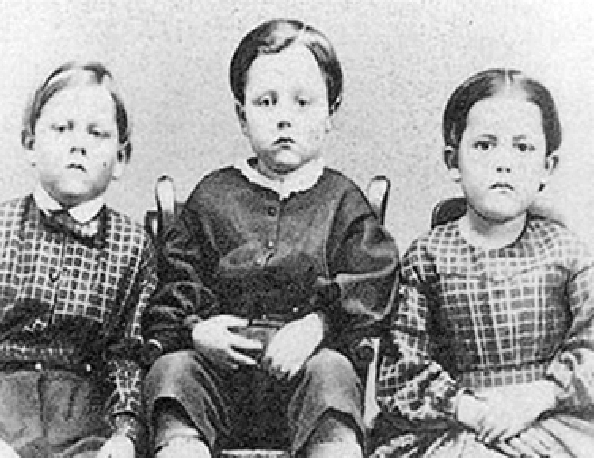 On July 1st, 1863, the first day of the battle of Gettysburg, Sergeant Amos Humiston of the 154th New York Infantry was covering the retreat of Union soldiers to Cemetery Hill.  Positioned behind a picket fence and brickyard, Amos and the rest of the 154th New York were attacked by two Confederate Brigades.1  Amos was able to slip out of the Confederate's grip and desperately ran toward Cemetery Hill, but was mortally wounded.  In his dying moments, Amos retrieved a photo of his three children from his pocket.  He may have thought about his last note home.  He had written, "How I want to see them and their mother is more than I can tell.  I hope that we may all live to see each other again."2

When Amos's body was found by Benjamin Schriver's daughter, she found that he was holding an ambrotype sent by his wife Philinda in June, but not his name.   Dr. John Bourns from Philadelphia, who stopped at the Schriver's tavern on his way to Gettysburg as a volunteer physician went back for the ambrotype and published the picture in a number of northern newspapers.3  He had been touched by this dead, unknown father.   He wanted to find the family and the name of this dead Union soldier.  By October 1863, the heart wrenching news that Amos was dead reached the Humiston family.  By selling copies of the photograph of the Humiston children, Bourn was able to start a fund to support the Humiston children and other orphaned children of the Union army.  He established an orphanage for these children in Gettysburg, Pennsylvania.

On November 20th, 1866, the house once used by Major General Oliver Howard of the XI Corps, was opened as the National Soldiers' Orphans' Homestead.4.  Philinda and her three children, Frank, Fred, and Alice moved to the Homestead, and Philinda became the first matron of the orphanage.  The Homestead children were very involved in the community and were present at many events.  In 1869, Philinda remarried, and moved to Becket, Massachusetts with Alice and Fred.  Frank remained to study for admittance to college.5  A year later, Dr. Bourns filled the position of matron with Rosa Carmichael.  This is when things began to go badly for the children at the Homestead.

By 1873, rumors began that Rosa was mistreating and abusing the children at the orphanage and in 1876, the children's absence  in the Memorial Day Parade in Gettysburg caused concern.  Each year the children had marched in the parade leading into the National Cemetery to place flowers on the soldiers' graves.  The Gettysburg chapter of the Grand Army of the Republic investigated the orphanage.  Rosa was arrested and charged with cruelty to an orphan.  She was convicted of aggravated assault and fined $20 plus court costs.  She was told to leave Gettysburg, but returned to the orphanage and continued her cruel reign over the children.6   Further investigations found that Rosa locked and chained children in a dungeon-like room in the basement of the orphanage.  There were also rumors of missing children who were never found.  In June 1877, the story of her treatment of the orphans was published in a Philadelphia newspaper, and reprinted in the Gettysburg Star and Sentinel.  That December the orphanage was closed, the children were removed, and Rosa was forced out of town.  The building became a duplex in 1903, a bed and breakfast in Gettysburg in 1915, and most recently converted in 2013 to a diorama museum entitled Civil War Tails.7  Although the story of the Homestead begins and ends tragically, it is an important part of Gettysburg history--a part that is kept alive through historical and ghost tours in the town.