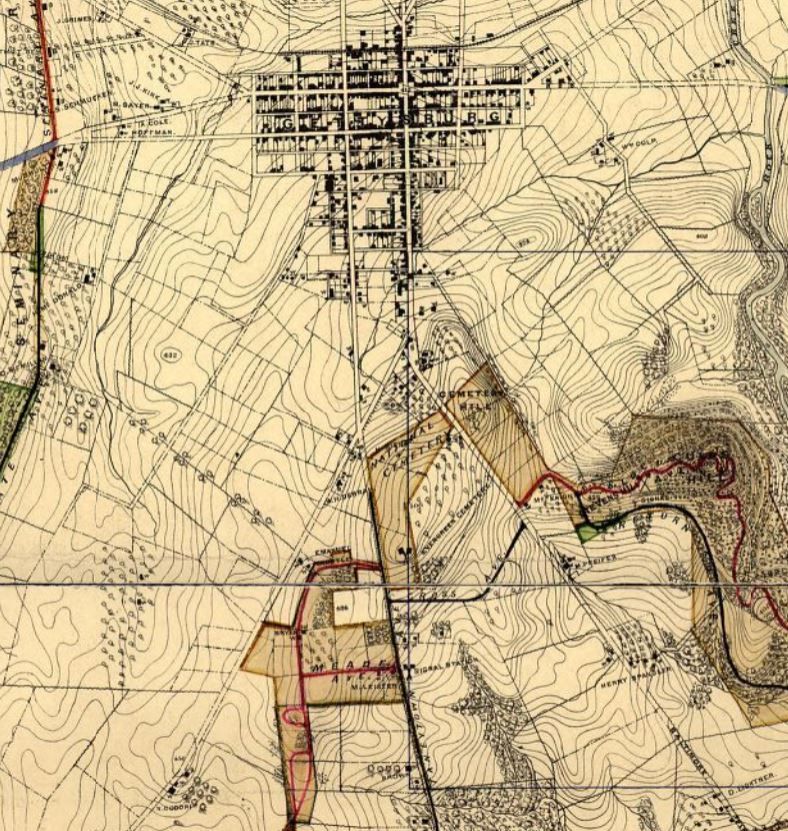 History in Gettysburg is dominated by the battle which was fought July 1, 2 and 3, in 1863.  Today the Gettysburg National Military Park (GNMP), preserves that history.  Few people consider the history behind the creation of the Military Park and the work that goes into its current preservation. The history of the GNMP includes such interesting events such as a Supreme Court case, a controversial tower, and a forgotten FantasyLand. The GNMP helped   shape the Gettysburg community and the history of Adams County.

The early history of the GNMP parallels the history of the National Cemetery. In 1863 both David McConaughy and David Wills purchased land for a National Cemetery which was dedicated later that year on November 19th, by Abraham Lincoln in his famous Gettysburg Address. The Soldiers’ National Cemetery was transferred to the Federal government on May 1, 1872. The Gettysburg Battlefield Memorial Association was created by David McConaughy and prominent local businessmen on April 30, 1864.  Its stated purpose was “to hold and preserve, the battlegrounds of Gettysburg… Memorial structures, and to commemorate heroic deeds.” The battle grounds were surveyed by Major General GK Warren - Major of Engineers between the years of 1868-69.

The first monument placed in the Soldiers’ National Cemetery was the Minnesota Urn.  It was installed by the surviving members of the First Minnesota Infantry Regiment in 1867 in memory of fallen comrades. The first memorial markers erected outside of the cemetery were the marble tablet on Little Round Top to signify where General Strong Vincent was mortally wounded, and one near the Wheatfield honoring the death of Colonel Fred Taylor. The first regimental monument erected in the GNMP to a unit was dedicated to the 2nd Massachusetts Infantry.  It consisted of bronze and granite and was placed Spangler’s Spring where they fought. There was of course controversy over some monuments. The most famous dispute involved the 72nd Pennsylvania Volunteers.  They claimed they fought at a forward position at the corner of a stone wall near the “Bloody Angle” but that their memorial was placed too far behind it. The dispute became known as the “Bloody Angle”. The regiment finally got their forward position after bringing it to the Pennsylvania Supreme Court.

In May of 1893, Daniel S. Lamont, the Secretary of War, created the Gettysburg National Military Park Commission to establish a National Military Park in Gettysburg.  The Gettysburg Battlefield Memorial Association relinquish their holdings to the Federal Government and the U.S. War Department took over the battlefield. The following year, the Gettysburg Electric Train company wanted to put train lines through the battlefield which led in another Supreme Court case (US v. Gettysburg Electric Railway Co.). On January 27, 1896, the United States Supreme Court proclaimed that private land could be condemned to preserve the GNMP. Over the years there were many presidential dedications and at the 100th anniversary of the battle, the town saw 2,041,378 visitors.

Throughout the years many issues brought the Battlefield into the news.  One example is the infamous tower which was erected in 1974.  It was 393 feet tall and consisted of five miles of steel, 14,000 bolts, and weighed about 2 million pounds. The tower’s demolition 2000 was a happy day for some, and upsetting for others. Many believed it was an obstruction of hallowed ground.  Others, like John Longanecker disagreed: “This is the most undemocratic, unpatriotic act ever committed on consecrated grounds.”   There was also FantasyLand which was created by Kenneth and Thelma Dick of Carlisle, PA. FantasyLand opened up on July 18th, 1959 and looked like a storybook; it was filled with fairy tales such as Rapunzel, Mother Goose, and Humpty Dumpty. This was closed in 1980 after the National Park Service bought the land from the owners.  What was Fantasyland is now the site of the Gettysburg Museum and Visitor Center.

The GNMP has a rich and fascinating history. The story is replete with veterans disagreements, memorials, and plans that required Supreme Court decisions.  It is a unique part of the fascinating history of Adams County, Pennsylvania.