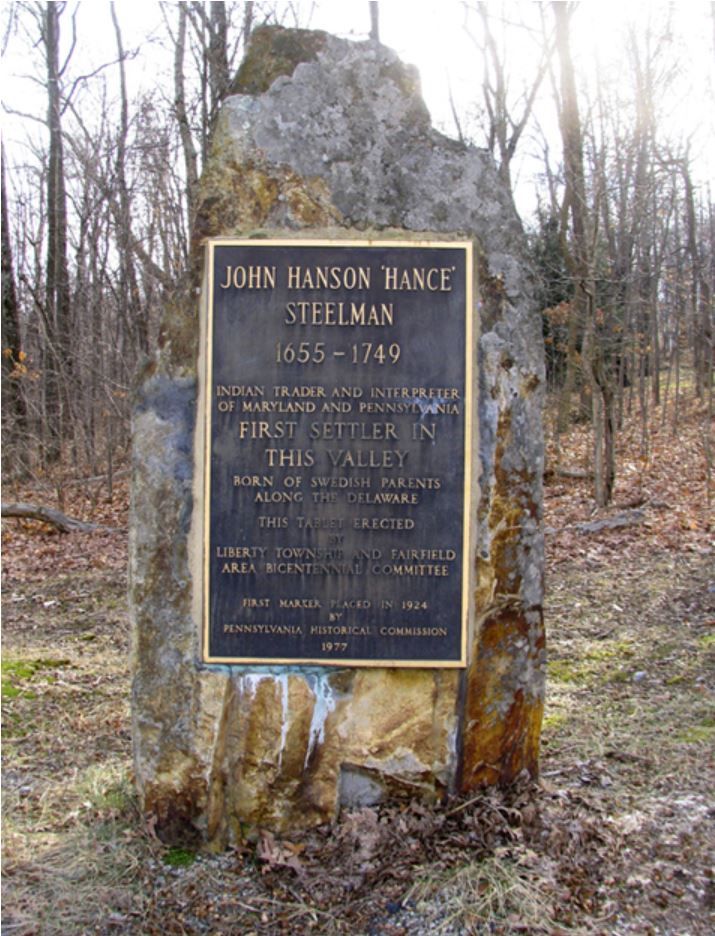 Ten miles south from Gettysburg, an unremarkable tablet stands at a public crossroad, off route 116, in the Monocacy Valley. The tablet honors John Hanson ‘Hance’ Steelman, (1655 to 1749).  Steelman, of Swedish descent, born along the Delaware River, was an Indian Trader and Interpreter of Maryland and Pennsylvania and, in 1718, the first European settler in this valley.  He was the lone European in today’s York, Adams, Cumberland and Franklin Counties.  He was probably the first white person to settle west of the Susquehanna River in this region.  He was a true “pioneer”.

His father, Hans Mannson Stahlman was born in either 1612 or 1620, in Hanaskede, Skarabory in Sweden, immigrated to North America, and died in New Jersey. In 1655, John Hanson Steelman was born near Gray’s Ferry on the Schuylkill River in what would become Philadelphia. Steelman witnessed the coming of William Penn and the founding of the colonoy of Pennsylvania. In 1695, he became a British subject.

John Hanson Steelman was proficient in Indian languages, and worked as a fur trader and interpreter for the colonies of Maryland and Pennsylvania. He apparently prospered from the fur trade business because he was the largest contributor toward the erection of Old Swedes Lutheran Church in Wilmington, Delaware in 1698. During this period he lived at the mouth of Susquehanna—later Elk River in Maryland. John Steelman was a correspondent of William Penn, in 1699 his guest. Albert Cook Myers, secretary of the Pennsylvania Historical Society who was born in York Springs, discovered a letter from Penn to Steelman encouraging the settlement of Pennsylvania.

Eventually, he received 200 acres of land from Pennsylvania which became a part of his land in the Valley. But the exact time of this land grant and its connection to the start of his business are not clear. One source suggests that he received this land from William Penn to encourage his movement into the area. However, this might be in conflict with the fact that John was then a trader in Maryland who had no license for trading in Pennsylvania. When he was sending goods from the principal trading center of Conestoga to the Forks of Delaware (later Easton, Pa.), the goods were seized by the Pennsylvanian government.  A bond for 1,000 pounds was set and also the date for a trial in Philadelphia. This was recorded in Minutes of the Pennsylvania Provincial Council Vol. 2, page 16. Another more credible explanation was from the original copy of the land survey record in the region: He received the land from the Pennsylvanians in 1741, which was one year after his testimony in the English Court to settle the boundary dispute between Pennsylvania and Maryland. He testified in favor of Pennsylvania in that court, which was probably the reason why the state rewarded him 200 acres of land (actually 236 acres according to the survey). However, it was in 1718 that John moved to the region and became the first settler.  At this early period the boundary between the two states was vague and confusing. Before 1734, there was no map of land west of the Susquehanna in the Philadelphia land office of Penn’s heirs. Lord Baltimore also had not purchased land from the Indians. For example, the actual reach of Maryland’s claim was far north of the later Mason-Dixon line. The local land map in the Adams County Historical Society revealed that Steelman’s land was located just at the edge between the two states, so it was highly possible that the actual land that he settled here first was on the Maryland side. His monument now stands on that land.

In Maryland, Steelman was probably dragged down by large debts, which could be one factor that drove him north to this wild and contested region. Also, at the time considerable numbers of Indians were living along the Potomac, Susquehanna and Monocacy Rivers. The great location of this land was surely a huge boost for his fur trading business. Overtime, all the Indian trails lead to Steelman’s trading post.

John Hanson Steelman led the tide of British settlers moving across the Susquehanna River, laying out the foundation of British rule and the British way of life in the area. He died in 1749—under the administration of newly-elected sheriff of York County Hance Hamilton. Later in the French-Indian War, Hance Hamilton commanded the provincial militias and decided at Kittanning Fort that the English language and customs rather than French shall be practiced in this region, which secured the English colonization of this region and in some degree followed Steelman’s footsteps.