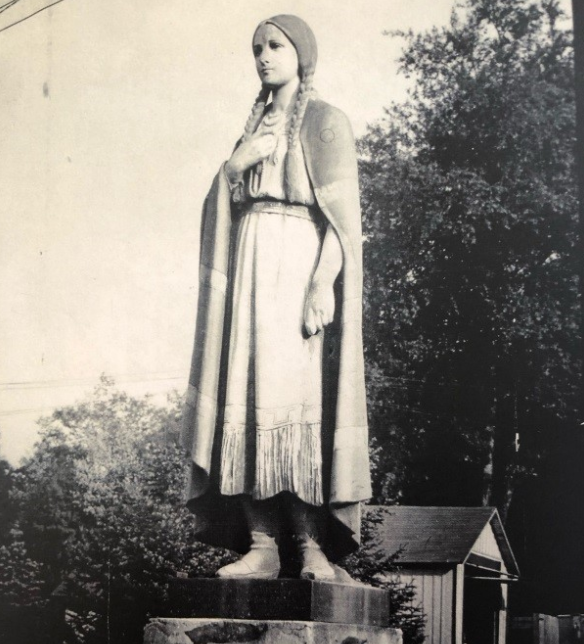 “…it seems like a miracle that I (Mary) am unable to account for.” Mary Jemison was born in 1743 on a ship in the middle of the Atlantic Ocean. Her story of surviving abduction and living peacefully amongst the Seneca Indians remains one of the most remarkable captivity narratives in American history. After landing in Philadelphia, a long ways from their native country of Northern Ireland, her parents, Thomas Jemison and Jane Erwin, settled onto a quaint farm by Marsh Creek in Adams County. In her autobiography, as told to Minister James Seaver at nearly eighty years old, Mary recalls her fateful capture at age 15. Thereafter, she details her life as it played out against the background of Indian and white relations as well as the French and Indian War (1754-1758). Her kidnapping can best be understood when set against the chronology of the war.

The beginning of the French and Indian War, the American theater of the Seven Years’ War fought between France and Britain, began as a misunderstanding. In 1753, to reassert British claim over the French to Western Pennsylvania, Virginia sent out twenty-two year old Colonel George Washington. In July 1754, Washington met the French at Great Meadows, with the intention of diplomacy. However, the situation took a deadly turn when Washington (or perhaps an Indian ally) fired onto the French, and they counter-fired. In the end, Washington lost about thirty-three of his men, and was forced to surrender Fort Necessity. Among these men, Mary claims, was her Uncle John.

Upon the outbreak of war, the Britain crown sent General Edward Braddock to seize French forts, though his early efforts proved hapless. In July 1755, the French, allied with various Indian tribes, defeated the British at the Battle of Fort Duquesne. Around this time and thereafter, Indian raids began along the frontier. Not until the summer of 1756, though, did the threat reach the Jemison’s home in Adams County. Reverend Thomas Barton, an Anglican minister, offered his own assessment of the perilous situation:

“the complicated Distresses of these poor Creatures are beyond Expression. What few Inhabitants remained in Cumberland are daily flying thence, so that in three or four days it will be totally relinquish’d. Marsh Creek is now the Frontier, and such a Panick has seiz’d the Hearts of People in general…”

South Mountain provided a natural barrier for some early settlers of Adams County. Still, for families like the Jemisons, it was not enough. Relief came in part with British victory at the Indian stronghold of Kittanning in 1766, and finally with the defeat of Fort Duquesne in November 1758. Nevertheless, it was all but too late.

According to a letter published in the Pennsylvania Gazette, the attack on the Jamesons’ home occurred in the early spring of 1758. The raiding party comprised of six Shawnee Indians and four Frenchmen, and their barbarity cannot be understated for the sake of sentimentalism.

The marauders spared Mary and a young boy named John Mann. However, they scalped the rest of her family and the other captives out of fear of avengers. “The manner in which I was deprived” of my family “all at once,” she told Seaver, “affects me so powerfully, that I am almost overwhelmed with grief, that is seemingly insupportable.”

These scarring moments served not just to break Mary down, but rather her cruel fate shaped her into a woman of enviable fortitude. The raiders took Mary and John Mann to Fort Duquesne, still under French occupation. Here, they were separated, and Mary was sent to live with two Seneca women for several years somewhere in the Ohio River valley. In time, she was moved to an Indian town in western New York. Despite several opportunities to escape, Mary chose not to return to white civilization, but instead she chose to stay with her new family. She married two Indian men, and bore eight children. Later in life, she settled along the Genesee River, hence her nickname “White Woman of the Genesee,” before eventually moving back to a Seneca reservation. She died in 1833 at the extraordinary age of ninety-one.

Mary’s remarkable narrative details a tumultuous period in Seneca history, spanning two centuries. Her insight into the Seneca experience remains useful to historians to this day, but it is perhaps her reflections on her own plight that deserves the most thought:

“…as every one knows that great exertions of the mind tend directly to deliberate the body, it will appear obvious that we ought, when confined (to a slave-like state), to exert all our faculties to promote our personal comfort, and let future days provide their own sacrifices. In regard to ourselves, just as we feel, we are.”

Mary overcame tremendous hardship not through self-pity, but sheer willpower, and an acceptance of present circumstances. Her story epitomizes the self-determination that defined the lives of early Adams County settlers.