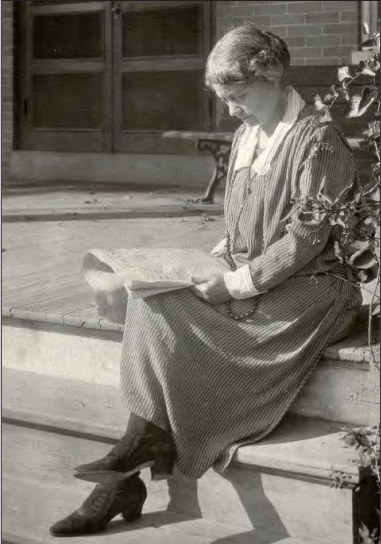 Elsie Singmaster was a local author. We will be selectively republishing some of her stories on the #15SouthBlog. You can learn more about Singmaster's work here.

It was three o’clock in the afternoon, and he remained indoors until four; then, made frantic by uncertainty, he crept through the thicket to the road. Kneeling, he looked out, pushing his head through the rhododendron branches.  He saw an appalling sight. Riding down the steep road, came a cavalcade of soldiers. He saw at first only three, sitting their horses easily, like the figures he had watched from ambush two years before. He believed that they had come in search of him, and his great body trembled and his jaw dropped.

He had seen only a small part of the advancing army; the descending road filled from side to side with marching men, scores, hundreds, thousands, with faces grim and gray as their suits. He heard a loud order to halt, and threw backward, sprang to his feet and ran. He had nowhere to go but the house, and he leaped, where he had crept, tearing his clothing and his skin, falling with a crash, rising with a whimper, until he reached the kitchen. Surely they would not come here!

But why would they not come here? Unable to stand, he sat weakly rubbing his rough chin and wetting his dry lips until he heard the crash of breaking branches and the tramp of heavy footsteps, and saw men in gray uniforms pushing their way in. He took two long steps to the hall door, three to the foot of the stairs, five to the top. Under the valanced bed, he laid himself down.

Storming into the kitchen, the strangers lifted the lids of the stove and piled in paper and wood. They opened cupboard doors and exclaimed over the quantities of flour and sugar and coffee which were on hand. He heard them enter the parlor, and he began to pray frantically to the God of whom he never thought from year to year. It seemed to him that a whole company were coming up the stairs. They burst open the shutters without bothering to unhook the clasps.

“Nobody has slept in these for much longer than two years. It’s a queer place; something underhand going on. Anybody under the beds?”

Laying hold of the ropes above his head, tight-laced to support the chaff bag and feather bed, Claibourne drew himself up. An object was passed beneath him; he felt the air on his shoulders and back, which were soaked with the sweat of terror, and knew that it was a sword. He heard it thrust back into it scabbard.

“I wish I could stay and sleep in this bed,” said a weary voice.

“You’ll sleep in a better one if we win to-morrow.”

“Or a worse,” said the tired voice. “Deeper, darker, harder.”

All the evening a confusion of sound filled the house. It was here, apparently, that a group of officers of high rank were to have their mess. The clamor of tongues increased; the tones were triumphant, with now and then a hysterical note.

Toward morning, Claibourne fell asleep, and when he woke, everything was quiet. A shudder passed over him – he was sure now to meet his fate. The light of dawn shone into the upper rooms for the first time in years; in a moment the sleepers might awake and hang him.

The light brightened, but there was no sound. He lifted his hand – there was no depression of the rope lattice. After a long time, he raised the valance and looked across to the bed in the opposite room – and it was untouched. They did not sleep in beds; they were camping round the house. The light grew brighter and brighter; it must be at least five o’clock. At six, he pulled off his boots and walked to the doors – the upper floor was exactly as it had always been. He warily approached the window and looked out – the trampled clearing was empty.

At seven having heard no human sound, he went downstairs. A multitude of birds were hopping round with their most fearless and familiar air – they would know if there were strangers here. He went into the kitchen and munched a dry loaf. He remained within until eight o’clock, then nine. They were gone – he breathed freely. Now if only Cravatt would appear! He looked into the mirror – he was not certain that the three riders in advance had been his neighbors and persecutors, but they might have been, and they might return. With a hand which slipped frequently and dangerously, he took off his day’s growth of beard.

As he finished, he heard a strange sound, as though a heavy weight had fallen away, creating a current in the air and the slightest tremor in the earth. He heard another and another; they came faster and faster, welding into a continuous roar. He grew deathly pale, but it was long before he understood that a battle was being fought in the direction of Gettysburg. The South would win and they would devastate the land and capture and torture him! He knew a cave in the mountain, unknown, he believed, to everybody else. Without waiting an instant, he seized the remaining crusts and fled to the woods, regardless of briers and sharp hawthorn spines and rocks which tripped him and received him cruelly He came to his cave and lay there for three days, hearing at intervals the sound of guns, which deepened on the third to a great and terrible thunder, followed by complete silence. That evening, weak and nearly starved, he descended the hill, to find the house exactly as he had left it. He saw no more of the single scout nor of the young officers, nor of the marching soldiers. Nor did he ever see Cravatt again.

Claibourne stole out of the thicket and stood at the edge of the road. It was the summer of 1865; the war had been over for months and Abraham Lincoln had been assassinated. The loneliness of his life had become intolerable; he had other human instincts besides cowardice and excessive vanity and he wished for human society. There was a little store in a mountain settlement whither he carried berries and nuts and where  he received a few necessities in exchange; but, like him, the people, illiterate and degenerate descendants of Colonial settlers, had a natural secretiveness, accentuated by fear of the draft and also of discovery in a variety  of illicit occupations.

It was his power over horses which got him a new master. As he stood looking idly up the road he heard a woman’s shrill cry, the frantic shouting of a man, and the sound of galloping hoofs, and in an instant there came into view a pair of horses attached to a high, double-seated carriage. Terrified by the breaking of a strap, they had started to run, and unless they were brought to a halt at once they would certainly destroy themselves and their passengers. Claibourne walked into the road and, holding up both arms, began to shout. The startled horses made an effort to stop, and when they were almost upon him he caught the bridle, threw his whole weight upon it. Turned slightly, the horses entered the woods and, trembling, came to a halt.

Together Claibourne and the driver repaired the harness.